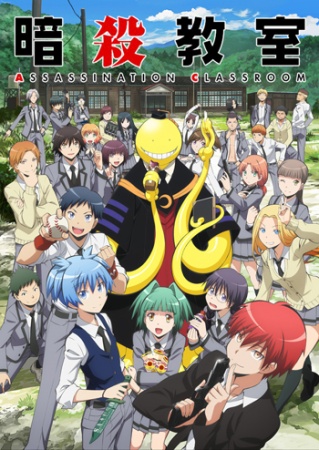 I just finished this series and as much as I was trying to find a lot of faults with it and trying not to give it the rating I did I had a hard time digging into this one.

I didn’t watch this series when it was first coming out. It seemed like a silly anime to me and at the time of it coming out I wasn’t in the mood for that type of series. But when I got around to watching it when I was in the mood I found I quite enjoyed it.

Since this was over two seasons I feel that the story gave enough information on the characters that we followed as a viewer. It even gave some background on characters we didn’t follow and only showed up for small sections. This lead to me connecting to most of the characters on screen at any given time. Holding back till near the end on the background of Koro worked out quite well. The viewer learned the history has the characters learned it. This made for an enjoyable experience.

Another thing this series did right was pulling on the heart strings of the viewer. It takes more than just throwing a sad moment on the screen and expecting a reaction out of the viewer. Anytime they wanted to tug at the heart they did a build up and then used appropriate music. To make someone feel an emotion you need to have the correct build up the correct imagery on the screen and the correct music. This series did it right!

Not going to lie when I first started this series I only gave it a 7/10 but after watching everything I gave it a 9/10. I tried to find anything to bring it down but for me I couldn’t find much. Then looking at my list most of the series I gave a 9 to I felt something when I was watching it. Not only enjoyment but wanting to know more, wanting to see more, wanting to go out and find more info on, or it was comforting at a point in my life.

The thing that brought this series down for me was some drawn out points. Most every bit of info on the screen gave the viewer information on a character or characters. It helped you build a connection with them. But sometimes it was to drawn out for me.

What helped it stay up in my eyes was the story. Once the basic introductions took place the story started to take off and from episode to episode they tied in very well.

The sades part for me during the entire series was at the end when the teacher was taking attendance before his students killed him. That was a very moving part. Was it slow? Yes but the comments you got in between calling the students names made it worth the watch. This was one of the best music, imagery, and build up I have seen to tug at the heart and it works well.

Would I recommend this series? Yes! 100% yes! I don’t do this for the anime I watch but because I was attached to this series I checked out the manga at least for the ending and it had very little change. So it feels like the anime followed the manga very well.