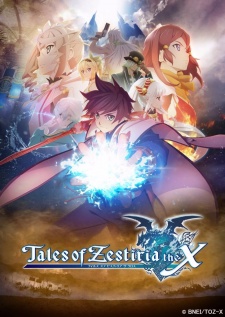 This will be in two sections. The second section will be in all red. It will be for people who have played the game and will have a lot of spoilers in it.

The art and animations was in my opinion was great. The effects from attacks and spells was great. The think I didn’t care for to much was the parts that got made with CGI. I haven’t seen an anime that can mix CGI and animation very well. A lot of the enemies that the MC fights look CGI animated. If they are in fact drawn animation ouch.

Music is great. I had no issues with what music was being played during any parts of this series.

The story is a strange part. Not strange because I played the game but mid way through they throw in some story that has to do with the upcoming game (at the time of writing this it is not out in the US) Tales of Bestiria. What that did do was lead me to look up more info on that game. I learned that ToB takes place before ToZ. Same world just in the past. So learning a bit about characters for that game in an anime might help players connect to the characters when the game comes out. But it felt out of place in the spot they decided to put it. I made not connection with what was going on in the previous episode to what they showed us with the ToB characters. If it was put in just to help boost sales for ToB I can see it helping but maybe have it split up at the end of the episode for ToZ. This would have kept people watching for the ToZ story and be interested for the full run of the anime for ToB. But as far as the ToZ story goes it was good. If you didn’t understand what was going on you could have missed what they talked about or you ended up in the same boat as the characters and had to learn as they learned.

I gave this a rating of 8/10 and that has part to do with the ToB stuff being slapped in the middle of the story. If I didn’t already play ToZ I think it could have gotten a higher rating but sadly I can’t.  Would I recommend this to people? Yes. To be honest one of the reasons I started to play any Tales of game is due to “Tales of Vesperia: The First Strike” as well as seeing Let’s Plays of it. If you haven’t played ToZ give it a try you might find yourself wanting to play it. If you have played ToZ give the anime a shot. It is a good story with a twist to what we know.

Alright if you are reading this then you have watched the anime and played the game or you don’t care about spoilers.

The characters felt the same up to Edna and Zaveid. The smart mouth Edna that I knew wasn’t here in this series. She was more of a shy little girl with a broken heart over her brother. Not that being sad about her brother is a bad thing. It adds to her character but she was more of the “Oooo a boy wants to help me?! EEEEEEE. *Keep cool keep cool*” type in the anime. That was the vibe I got from her. The only thing she did that was like her character from the game was making fun of  Mikleo. Then we have Zaveide who was all upset about Edna’s brother becoming a dragon and backing down saying “The world is a big place maybe a way to turn him back can be found.” The welcome change to him having a heart was nice but wasn’t him.

Getting Edna and Mikleo as subs in a different order was cool. Having Mekleo go out on his own to get his weapon to help Sorey was a nice way to progress two different stories at the same time.

When Sorey went and fought The Lord of Calamity and was changing different power ups was cool. Not losing contact with Lailah, Edna, or Mikleo made that part better for me.

At the end Sorey asking Rose to be his Squire after all that and then going their separate ways felt like more of a love story than doing it to fight.

Overall if I could give this a rating mixing what I know about the story from the game and what they did in the anime it would be a 9/10. Why so high? I liked the… I loved the story in ToZ and having it told in a different way with the same idea so far is nice. But the character changes of Edna and Zaveid is sad. The connection I had with the characters in the game is only made stronger by this anime. But like I said above the ToB episodes could have been put at the end of episodes and would have served better. If I wasn’t keeping ideas when watching the anime for this post I would have forgotten all about the ToB stuff. I have excited about both ToB and the second season of ToZ. I liked the fact we had more Alisha in the anime and we got a bit of Rose near the end I just hope in the second season we still have this and we don’t lose sight of Alisha like we did in the game. I know ToZ had DLC for Alisha but that felt more like the devs saw people upset that we lost her and wanted to throw something out to try to make people happy.