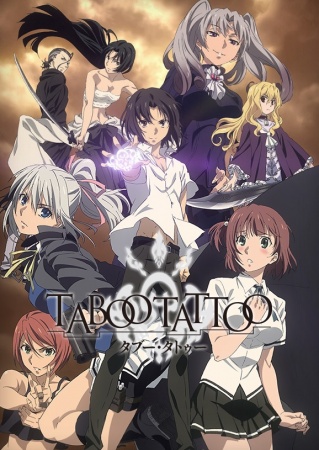 When I first started to watch this one I thought it was a bit strange and I am sure that other shows have done the Tattoo giving powers thing before but I can’t recall in recent memory of one doing it. People get tattoos and they need to use something to activate them.

The story when it first started out was captivating to me but about half way through I just wanted it to end. Not due to it being a bad show but I wanted it to end so I could go look at the manga. I felt a lot of the story got rushed in places and it made me wonder what was going on. It didn’t help this this show did the play ending and have more story after the ending. Shows need to stop doing this. If I see credits I go to the next episode but this lead to confusion and having to go back and watch it. Best part was not every episode did this.

One of the genres is comedy. Honestly the show would have been better with out it. It felt like the creators felt it was getting to heavy at parts and tried to shove comedy in to break up the tension for the viewer. If the characters on the screen reacted for more than a second it could have worked but to me it didn’t. It just felt out of place.

I did like that fact that this show killed off the love interest of the MC. I wasn’t happy it happened but I was happy to see a series kill off the big boob character and have it impact the MC in a meaningful way and also a negative way. Using it to make him stronger but also play into the bad guys hand at the same time was good. It wasn’t the key to making the MC overcome the bad guy.

As for the characters I felt no attachment to them. If someone died I just went “meh” and waited to see what was going to happen next. Next to no character building happened and when we got a flashback episode it was more of a story telling aspect than a get to know the character. We did learn why characters are doing what they are but failed to make me connect to any of them. This was one of the major parts that made me just want to have the series end.

The music playing went well with what was going on but it did nothing to move me. I like the music but if it wasn’t playing I wouldn’t have missed anything.

The ending was meh. But the ending after the final battle made it seem like they wanted to set up for a 2nd season and also tried to bring that comedy in at the same time. I was honestly confused about what I was watching. I could have done with out it.

The animation was good. I didn’t feel like the fights lost any quality when they went on but we did have a bit of the swing blade, bright light, character shocked background moving character not moving and a body part twirling around.

The no connection to the characters , the feeling of it being rushed and the trying to put comedy in when not needed brought this down. As well as that strange ending. I would recommend it to people but only after other series and if you want anime to watch. If you are on the edge to watch this or another show watch the other show first and come back to this one.