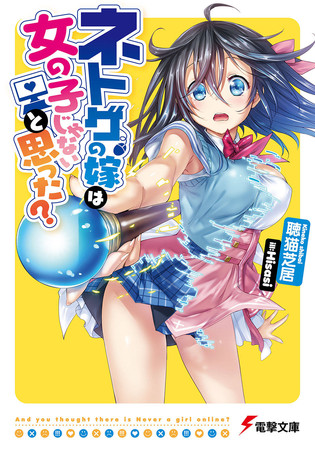 Ever since the anime .//hack I have enjoyed watching anime about games. So I have tried to watch them when they show up and that’s how I decided to watch this anime.

Oh boy was I disappointed in this series. It did show something anyone who plays games will understand the addiction that game can cause and that is even more so with an MMO but this series never let Tamaki get past that issue. Thinking the game world and the real world are the same.

Nishimura and her get married inside the game after a meet up in real life with the guild oh and by the way everyone in his guild online just so happen to be people from his school. Nishimura starts to have feeling for Tamaki after she said that she had feelings for him. Then they find out their teacher also plays this game. Also this teacher happens to be the first person Nishimura confessed his love to. Oh I forgot that all the people in his guild are also girls.

I felt the story was going to be one of trying to get Tamaki to separate the game world from the real world and at the end of the 12 episodes I felt like everyone in the guild had the same addiction to the game at different levels. Nothing was truly resolved.

I view this series as more of a fan service anime than anything else. The story is bland but the art is ok. I never cared for characters boobs bouncing when they don’t need to and this series did a lot of side boob bouncing action. I would say 90% of it wasn’t needed. It felt more like the creators said “Yea the story is kinda lacking but hey look we can make boobies bounce!”.

I gave this a 5/10. The things that kept it from going down was the fact it had some aspects of gaming in it, the art wasn’t too bad, and it didn’t put me to sleep. I did want to see how the story ended in each episode. The characters are forgettable as the viewer I felt not attachment to any of the characters.

Would I recommend this series? If you want to see bouncing boobs then yes. If you want a story line of any kind then no. If you just want a series that can make you laugh at time then yes. This would need to be a series I would recommend when you have nothing else to watch but you need an anime fix.