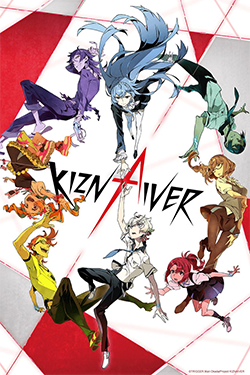 MAY CONTAIN SPOILERS – I wrote this back on 07.03.16 on Twitter so I don’t have the spoilers in red text.

Finished this series up and it had an ok ending but I was very bored till the last few episodes.

The show tried to do the backstory thing with everyone and they did it OK for the most part. The 6 characters that we follow had an OK background story and you felt like you knew them enough to feel for them. The 7th character to be reviled to the viewer I could have done without. The story on him was meh. Besides the funny moment when he was first reviled getting off to pain after that he was pretty bland. More of a character to be in the place to say the “right thing at the right time”

Giving us the backstory of the MC in the last few episodes was OK it made the adventure with him worth it.

The ending didn’t feel rushed but the moments leading up to the ending felt rushed. But I can overlook that since during the rush info about what was going on was reviled by some secondary characters that is the only reason I give the bit of rush I felt a pass.

This was one of the few shows I have watched that the MC and the girl he has been friends with don’t hook up at the end. Yea she tells him how she feels but that didn’t make things happen.

However this is the first show in recent memory that put me to sleep. For about 4 or 5 episodes I was fighting falling asleep. I was rather bored of what was going on and it felt like info for the viewer was being gated just for the sake of making the show run 12 episodes.

Would I recommend it? Only if you are unsure of something to watch but want a OK story but good art and OK music to play during the show.

I gave this series a 6/10. The boring parts brought it down a lot. I felt the story could have been presented better. Feel like a bit more story on the project could have been reviled to the viewer and done so a bit sooner in the series. The hook up at the end with the MC and the girl from the project from his childhood could have been portrayed better. No I am not upset Agata hooked up with Sonozaki. What I am more upset about is it feels like a forced thing only because they liked each other as kids but past that we the viewer have no reason to understand this relationship other than to guess he is doing this because he feels bad for her dealing with all the pain from the children she was linked to for so long and making her give up her “dream” of linking everyone together. That is just how I felt at the end. The characters are likable and you feel for most of them. The emotions they try to show during the series you can feel and to me that is a good thing. But even that cannot overtake the feeling of wanting the series to end.

Why didn’t I drop it? It is true I have no problem dropping a series unless someone tells me it “gets better” or “give it 2 more episodes”. But at the time I started to get very bored of this series I was already over half way done and I felt I needed to see how it ends. So I did and am happy I finished it. Happy it had one of the things I crave the most! A backstory, a reason to care about characters. But even with that the boring parts couldn’t pull this out of a 6 rating for me and couldn’t make me recommend this series over other series.