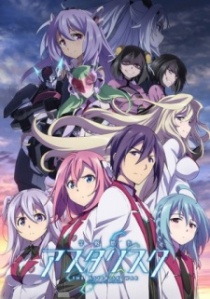 MAY CONTAIN SPOILERS – I wrote this back on 07.02.16 on Twitter so I don’t have the spoilers in red text.

Before you go looking for the first season post I will tell you right now I don’t have one. Why not? Well I didn’t start writing these till this season of anime so um… yea!

I did want a 2nd season when this show ended it’s first and was happy that we got a 2nd season and I will admit I want a 3rd season. The overall story I enjoy and want to see more of but the way it is presented to the viewer can be polished up a bit.

The way the male MC unlocks some of his power is a bit cheesy but I can look past it. The fighting in this series is ok it follows the same old same old. MC = strong then Bad guy stronger = MC finding out they have untapped power to be bad guy. That is a bit boring but what draws me into this series is the story. At first it feels like a normal everyday Supernatural, Sci-Fi, Harem anime but you start to see the bigger story unravel as the series goes on. Could this have been speed up a bit? Yes I think that would have made it a more enjoyable series to watch.

Music is something I don’t write much about since you like it or hate it but most of the time the music put into a series fits in the place it is in. But for this series the music for me made the show that much more enjoyable. Yes the music was right for what was going on, on screen but it was powerful music that I enjoyed. It was music that I haven’t enjoyed so much since the Ichigo from Bleach song “Number One” or SSJ2 Gohan from Dragon Ball Z song “Unmei no Hi: Tamashi tai Tamashi”. I have enjoyed other music from different anime but when a song/music can get a big reaction out of me it shows me I very much enjoyed the song and what was going on in the show. The one I enjoyed the most from this series was “Lonely Feather”.

All in all I do hope this series continues in anime form and I hope we get many more seasons of this story. While the fighting is nothing we haven’t seen before the overall story seems like something different and I want to see how it concludes.